When on the wrong track

I don't know what started me off on the wrong track this morning, it could have been the dithering about what to sew today, which length of fabric to start with.  I've been sewing every day with left over scraps of material and a bunch of off cuts given to me by a friend, so I guess I've been relaxed about it.  My eyesight isn't what it used to be, neither is my brain.  Nothing I make bears close inspection but I've been doing OK.

It hasn't mattered if I stuffed something up but this morning I had two brand new lengths of material in front of me.  I must have got dizzy with excitement because from the moment I decided which piece to cut into everything went wrong.  I could probably write a thousand words on the various mistakes I made.  Suffice to say I am practically cross-eyed from so much unpicking of seams where they should not have been.

I should have known to stop after the second or third stuff up but no, muggins kept on keeping on until I realized that scream I'd uttered could have frightened the neighbours.

So I'm putting off preparing my dinner until I feel a bit more self assured and am going to sit and watch the cats.  It's a sad day when all I have to show for my day are pics of the cats.

The couch is covered with a sheet, there is a little towel in place where she usually sits but today she decides she needs all the pillows as well. Wish I felt as relaxed as Ally looks. 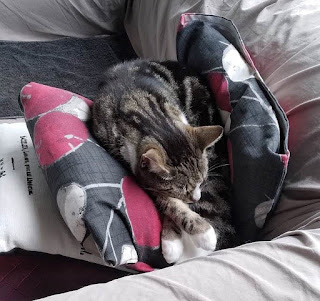 When one pillow won't do! 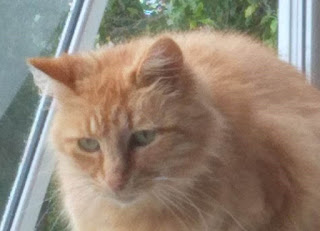 Don't ask me what Korbi finds so fascinating about my feet!
on November 17, 2022