Rob and the fisherman

Facebook users will be familiar with the Memories function where they remind you of what you posted on this day in past years.

After a prompt from Facebook, at the moment I'm being reminded of the road trip I did with my sister, Tricia along the Queensland coast in 2018.  We started in Cairns, went north to Cooktown and as far north as one can venture without 4 wheel drive.  Then turned around and went south down the coast to Brisbane with many enjoyable stops in between.

Thanks to the reminder, I've spent a lot of the past few days thinking about Rob.  Someone I've never met but I have visited his grave and it made a lasting impression on me.   Rob is buried in Cooktown, in far north Queensland, right in the back corner of the cemetery. 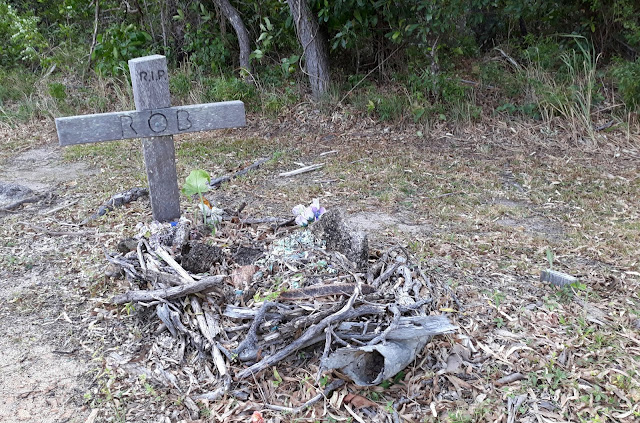 Who was Rob I wonder?  Did no-one really know his full name?  Obviously someone cared enough to put a marker there for him.  I wonder if there is a back story to why his grave is adorned with sticks?  I threw on a couple extra.  I got the feeling Rob wouldn't have wanted flowers.

He is listed on the FindaGrave website as Rob Unknown, with birth "unknown" death "unknown".    Maybe that is what he would have wanted.  I just think it is incredibly sad but is it any sadder than the dozens of other graves in that cemetery where, for cultural reasons, the graves of Chinese and aborigines were not marked in days gone by.  Maybe it was the simplicity of his 'headstone' that captured my imagination.

Oh, and along with my morbid fascination with the Cooktown Cemetery I discovered that it is indeed a cemetery as compared to a graveyard which primarily refers to a burial ground within a churchyard.   Who knew?  Not me. 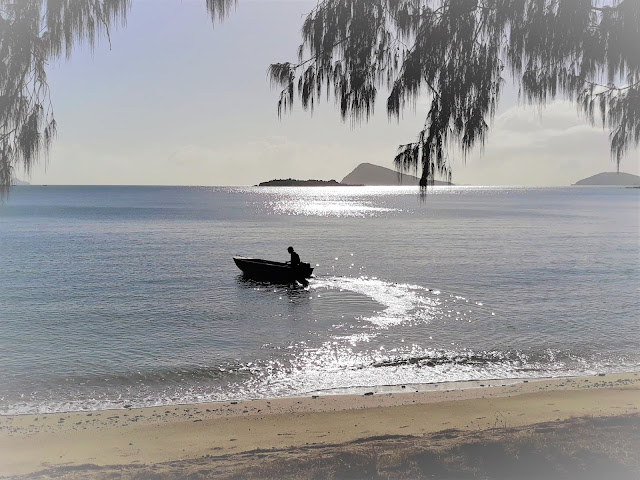 Another man we met on our travels who sometimes springs to mind is the fisherman at Hydeaway Bay in the Whitsundays.  He was pretty ancient and I say that kindly as he may not have been much older than me.  He carried evidence of years spent in the sun, a retired cane farmer, perhaps, or maybe he had always been a fisherman.

After my sister and I had enjoyed a happy  lunch and afternoon with old friends, Bill and Linda who were celebrating their 50th wedding anniversary at Dingo Beach Hotel we'd gone with them and other friends to their accommodation at nearby Hydeaway Bay for a bit more celebrating.   We stayed with them the night and the next morning after they had rushed off back to their home at Airlie Beach with prior commitments, Tricia and I had a leisurely drive further around the coast and then stopped on our return for a stroll along the tree lined beach with wonderful views across the water to Gloucester Island, Saddleback Island and many more.

It was still reasonably early, probably around 8.30 am and we were in no hurry.  Although we planned to be on the road south again that day we didn't have accommodation booked for that night so had no schedule to meet.    When we came across the fisherman putting his tinny into the water we stopped for a chat.  He was in no hurry either, explained he was waiting for his mate to turn up and go fishing with him.   But after a while he said it looked like his mate wasn't coming, he's have to push off, get going before his wife came past and saw he was heading out to sea alone.  We gathered that wouldn't be a welcome scene and gave him a wave as he headed off in that lovely sparkling sea.  There weren't any subsequent reports of men missing at sea so he must have returned safely.