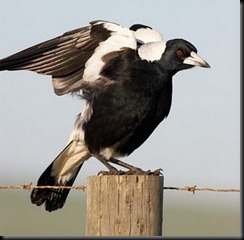 I love magpies. I realize I am in the minority. They are not generally loved in NZ, in fact they are more often than not regarded as pests. I feel sorry for any animal that has been introduced from another country (Magpies were introduced to New Zealand in the 1860s from Australia to control pastoral insect pests) and then they are despised and hunted when they don't assimilate with the native creatures and habitat. It's not their fault! The possum is a better example of this but the magpie has its share of detractors too.
My son is a major magpie hater. He gets upset when he sees them attacking native birds but I argue they do far less harm than rats and cats do.

From early July through to Oct/Nov, during their breeding season they often attack (dive bomb) children, cyclists, farmers and runners. I've been a near victim in the past but I just moved as quickly as I could away from that area and avoided it for a month or two afterwards.

Magpies are nesting in the big old tree right beside where my grand-daughters get on and off the school bus. And they are becoming more and more aggressive. Actually, only the males attack (the females are too busy sitting on the eggs).
If two of the girls are walking up the drive and the other one is walking along the road to come to my place when they get off the bus, he will swoop at one then swiftly fly across to attack the others, then back again and so on until the little one is safe inside and the other two are far enough away to allay his fears. He has hit the youngest one on the head a number of times.

I try to explain he is only doing what comes naturally, being a good father, defending his family, keeping danger away from them.

Interestingly, most magpies which attack people on foot attack the same few individuals over and over again. If they attack others, it’s probably a case of mistaken identity. These magpies may have had an early traumatic experience – perhaps someone who looked like these people had harmed the magpies chicks, or even 'rescued' a fledgling, something the parent mistook as predation. Magpies are able to recognise and remember individual human faces, even if the person wears different clothes! I think they can sense fear. Krystal turns to see if the attacker is coming but he doesn’t attack her. He targets Shayde and Georgia who shriek and run.

And they can tell the time and so these guys will know exactly when the school bus is due to go past.
I remember reading somewhere that a flag flying behind the head will sometimes distract an attacking magpie, so I’ve made the girls a flag each. I think they are meant to be orange but didn’t have any orange material, gold was the closest I could find.

Here’s hoping they work. I’d hate the girls to grow up frightened of magpies.
on October 25, 2010 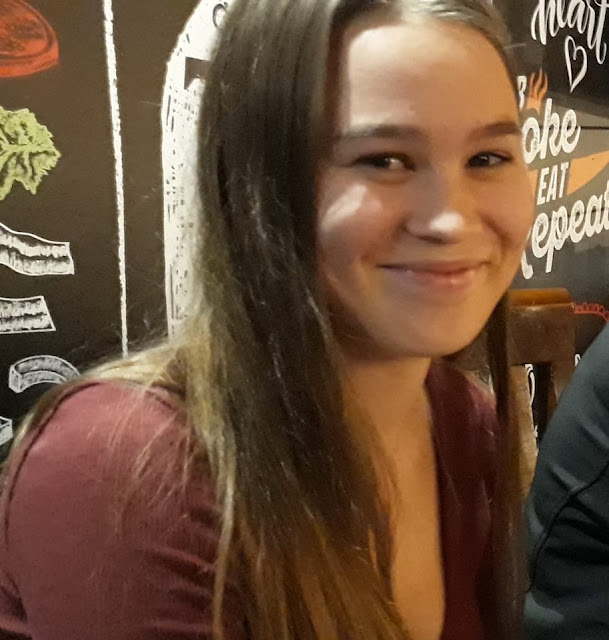