Waiting for the storm

Only two months ago we experienced a "once in 500 year storm".  That one was a beauty.  Beauty may not be the word you would use but I enjoy a good storm.  That was when my son was lucky to escape unharmed when he drove into flood water.

Now, today, we are waiting for a "once in 10 year storm".  My neighbour came over to warn me of its approach yesterday afternoon when I arrived home and offered to tie down my grand-daughter's trampoline which lives in my back yard.  I think he mentioned 'weather bomb' as well.  He's in the fire brigade so I thought he would know if an approaching storm was serious or not, so gratefully accepted his offer.

I think this storm is mainly going to effect the South Island but I did a bit of Googling and discovered they had their once in 10 year storm in 2017, so it must be headed somewhere else.

I'm over all the hype about storms.  There's nothing unusual about spring storms in New Zealand, they happen nearly every year.  Now they come with dramatic warnings, every storm has to have an historic connotation as if every high tide will turn into a tsunami.

I know the powers that be just want us to be prepared but I feel they make so much fuss, so often, that they run the risk of losing credibility.   I know that is fast happening with me.  I'm getting very annoyed at the sight of my deck chairs taking up space in my living room while the sun shines outside.  OK, it's a little windy and I do mean only a little and we had some nice gentle rain earlier this morning.  I'm over it!

On a happier note I had a lovely day out yesterday with visitors from Taranaki.  I enjoy nothing more than acting as tour guide to visitors to our region.  We enjoyed a round trip out to Ngunguru, Tutukaka and Matapouri Bay and home via Hikurangi and Maungatapere.

The bush in front of the lookout on the road to Tutukaka needs a trim. 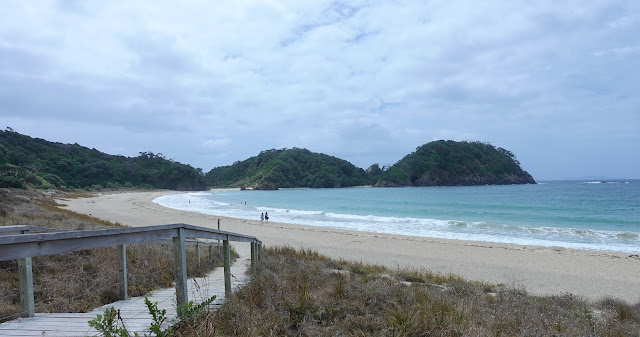