Nearly every day I see a photo of Mount Isa, maybe a recent one, maybe an old one, on a Facebook page I follow.  Yet, I've never been tempted to write a post about the seven years I lived there in the 60s and 70s.  Three of my four children were born there, so it plays a significant part in my personal history.  As it does in the lives of a brother and my sisters. 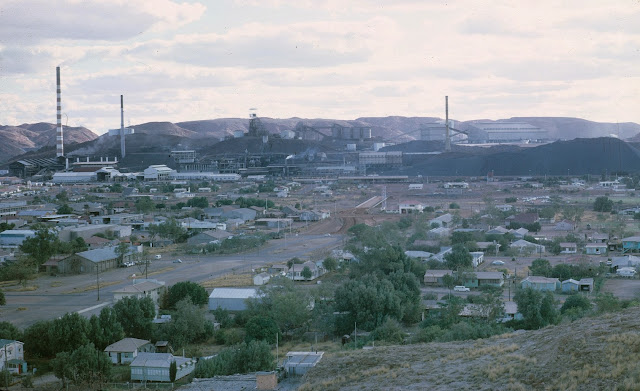 I was pregnant with my oldest child when we went there in December, 1966 with the plan for my young husband to work in the mines.  There were plenty of work opportunities and the rewards were good.  Mt Isa Mines was enjoying good times.  Mt Isa Mines Ltd (MIM) operates copper, lead, zinc and silver mines.  At the moment it is in the top two of the largest  copper mining and smelting operations in Australia.

The 900 km trip from the coast was memorable as there had been rain in the preceding days and creek crossings were hazardous.  The summers in the outback of northern Aiustralia are very hot with highly variable rainfall.  Sometimes there is no rain at all, sometimes it can be extremely intense but most of the time it is just hot and dry.

I suffered from the heat that first summer.  Pregnant, living in a caravan which was like an oven during the day.  The coolest spot was outside in the shade of the caravan.  Or I'd go to town to walk around in the air-conditioned shops.  I'm forever grateful to a friend who worked in the Barkly Hotel, which had the most efficient air-con in town, and invited me to sit in the lounge bar as there were never any guests in there during the day.  So that was where I spent most of my days with a book and the daily crossword puzzle.  Not the typical hangout for a pregnant woman but Mt Isa was not a typical town.

A typical summer is mostly hot windy days over 40°C (104F) with clear skies and low humidity, a few weeks of 35-40°C temperatures with higher humidity and spectacular thunderstorms and, every few years or so, a few days with heavy monsoon rain and cooler conditions below 30°C  (86F).

I'll never forget those thunderstorms, they seemed to roll across town as if up a valley, white hot lightning and ear splitting thunder and, always, the hope, the wait for the first drops of rain to hit the roof like bullets.  Most of the time, like our government, they promised much and delivered little.

Over the years two of my sisters came to the Isa to work and met their future husbands there.  Esme lived there until her husband retired from working in the mines and they moved to the coast.  Tricia and Bob returned for a couple of stints at the mines.  I've only been back once, in 1991, when they were both there, and I was delighted to witness something I only saw once when I lived there.  Water coming down the river from rain in the catchment area, while it was still bone dry in town.  The water came in a wave with a rumbling sound and, within minutes, a dry creek bed was tranformed into a raging torrent.  Everyone goes to the river to wait for the water and to watch, it was a real carnival atmosphere.

My other two sisters paid for their education by working in Mt Isa during the holidays and my young brother, Bernie came to live with us when he left school, to do an apprenticeships at the mines. 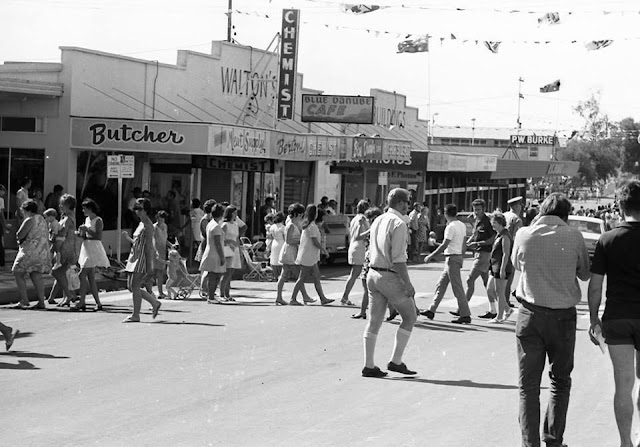 The main shopping area back in the days of mini skirts and long socks and shorts. 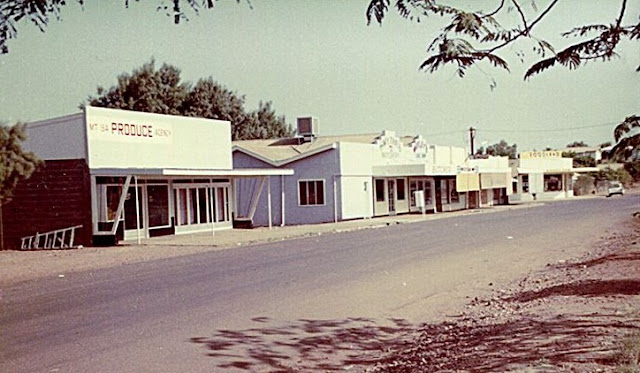 My local shops where the butcher sometimes wrote the cooking instructions on the white butcher's paper in which he wrapped the goods.

Now here's the photo that set me off down memory lane.  There was a movie theatre in town, and a bit later, a drive-in but, honestly, it was more fun to go to the BSD pictures.  And it was free.  I had to do a bit of research to be reminded what BSD stood for.  It was named that in reference to the American Army Base Supply Depot of the late 1940s.  I think that had something to do with the tar-sealing of the road to Darwin.

It was the brain child of a former chairman of Mount Isa Mines who wanted to provide 'alternative' entertainment for his employess (and the rest of the town).  I guess the alternative was to the pubs.

There was a wonderful, casual, family atmosphere.  People arrived laden with blankets and pillows, kids in their pajamas.  You could spread your blanket on the river sand and use the logs provided to rest your head.  It was important to get there early to get a log. The movies were always a bit old, and had to have been shown at the town theatre (and later the drive-in) first to avoid unfair competition but no-one minded that.  I often took the children when my husband was on afternoon shift although I don't think he ever went.  I remember seeing Barbra Streisand in Funny Girl which put my two children fast asleep and having trouble waking them up when it ended.  No worry, two men carried them to the car for me.

My kids loved going to the BSD, always hoped there would be a dog fight.  No, that is not slang for anything.  Many people took their dogs along and others would just wander in, there were no fences separating it from the street, and occasionally the inevitable happened.  I was never in attendance when the viewing was interrupted by the sighting of a snake but I don't think anyone was ever bitten. 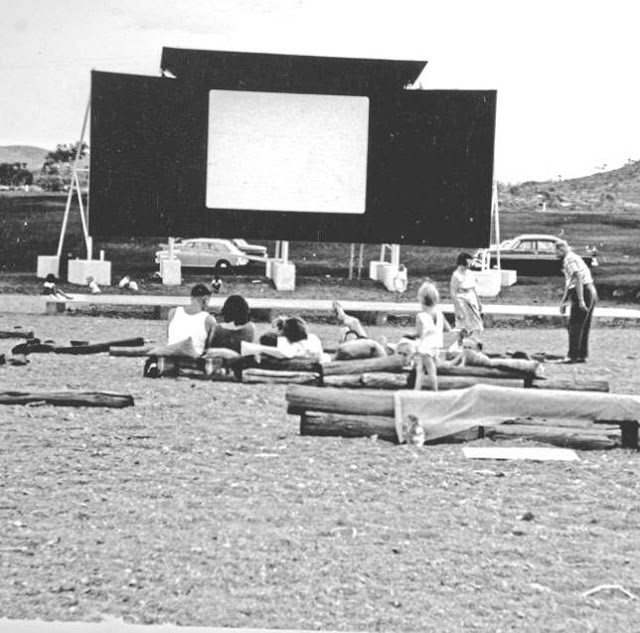 MIM is still operating but with the advent of FIFO (Fly in, fly out) workforce, and the downturn in the Australian mining industry, I think the town's glory days are over.  The population is shrinking and is now back to roughly the same as when we went there.

In this age of instant connectivity I can look back and think it strange that, although we eventually got a TV in 1970 (to watch the Olympic Games) we never got a phone installed.  There was one phone in our street and, although the rest of us continued to use the public phone about a mile from our house, everyone knew we were welcome to use that one in case of emergency.  Luckily, I never had to do that.

Strange the things I remember.  I recall my indignation at having to pay over a dollar for a cabbage during the floods of 1968 when the town was cut off in all directions for weeks on end and all food had to come via air freight.  And being introduced to milk in plastic sachets. Before then milk was transported, already bottled, by train from the coast.

I remember the first traffic light being installed and refusing to go that way to and from the mines.  Some things never change, I still hate traffic lights.

One of the best things about life in The Isa was it's cultural diversity.  I only knew one person who had grown up there or had family there.  Everyone else came from somewhere else, lured by good money to be made in the mines and subsidized housing. MIM was attempting to stabilize it's workforce by offering new homes at very low deposit (ours was $600) and low repayments, provided you stayed for 5 years and then sold back to the mine. It attracted many, including immigrants, who were prepared to work hard and accept the isolation.  People relied on each other, helped each other out, there was a deep sense of camaraderie.

At that time Mt Isa it was the most multicultural city in Australia and had the largest Finnish community in the land.  My oldest son learnt how to sing Twinkle, twinkle little star in Finnish before he knew how to sing it in English and my oldest daughter had a choice selection of Greek words which, unfortunately, turned out to be swear words.