Mangamahoe and the cemetery

I don't know what I've been doing with my time since I returned from Taranaki but there hasn't been any left over for blogging.

Whenever I'm visiting Taranaki I become obsessed with the mountain.  Slowly over the last 6 years or so I've managed to photograph it from many angles but there was one shot that evaded me.  Lake Mangamahoe with the mountain reflected in it.

The day before I was to return home, when I dropped my grandson off at school, the mountain was clearly visible and there was little wind so I scampered along the road to check out the lake.  I didn't have my camera with me so used my phone.  There were slight ripples on the water but this is the best result I've had so far. 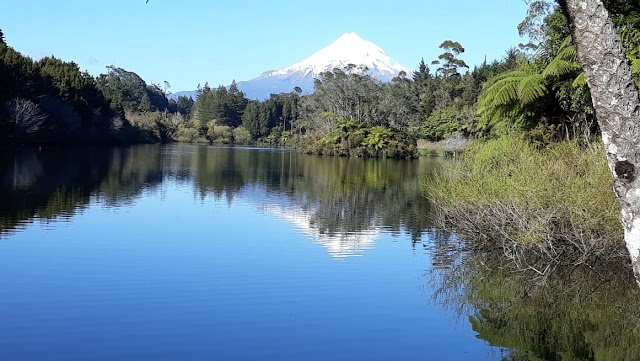 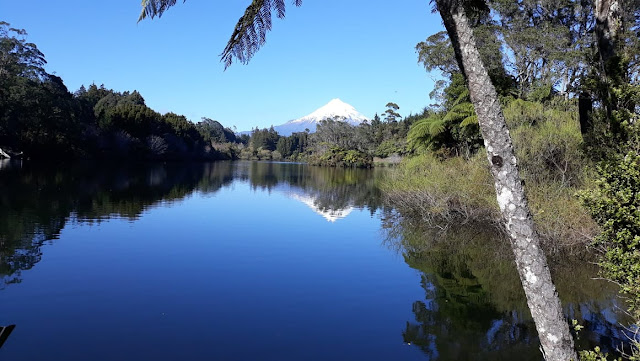 Lake Mangamahoe supplies drinking water for New Plymouth District.   No boating or swimming is permitted in the lake so there is little to disturb the wildlife, it's duck heaven.  They were everywhere enjoying the sunshine. 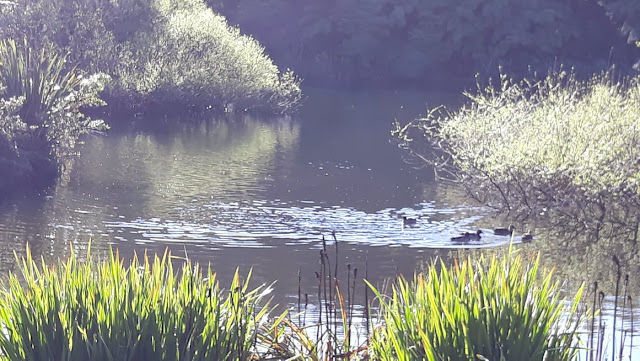 Obviously they weren't hungry.  Although quite a few were gathered near the picnic area, they didn't bother to see if I had anything for them. 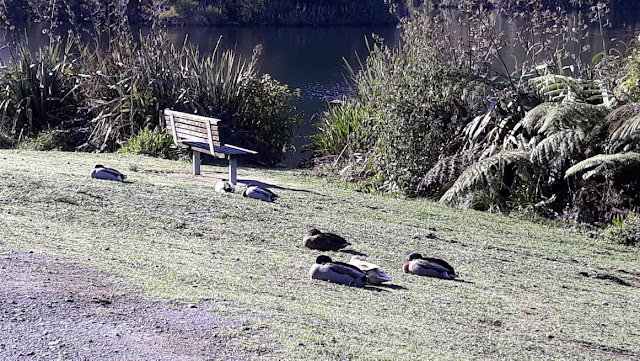 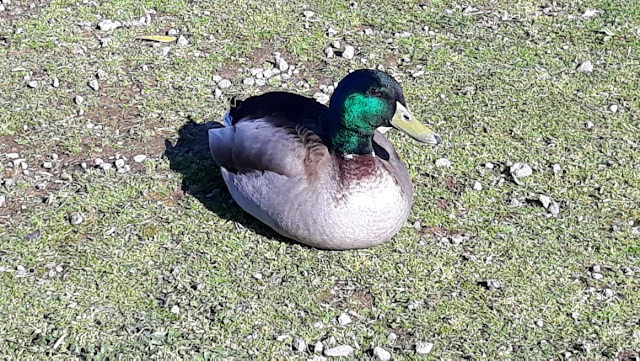 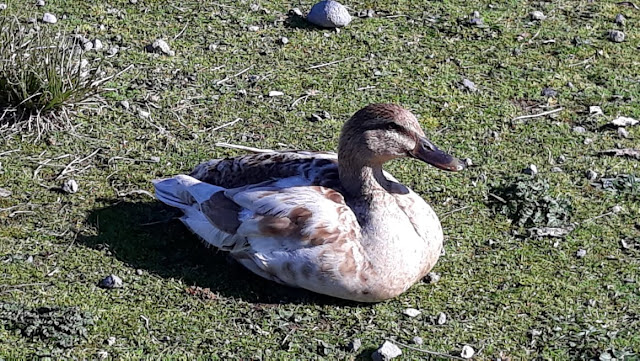 I think this is a young female mallard.  Her colours were softer than they usually are. 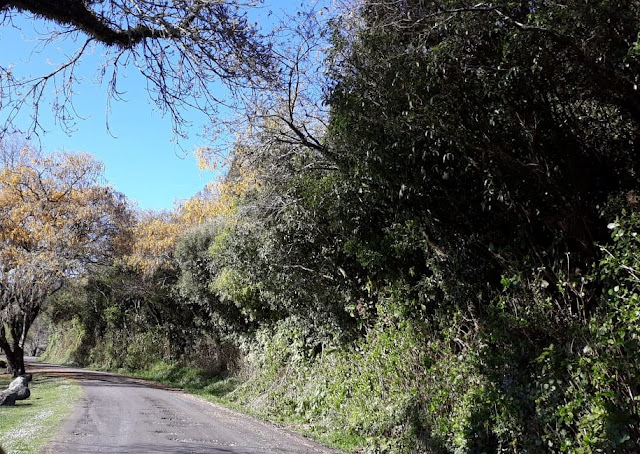 Kowhai lining the road into the lake

By the time I had rushed back to my daughter's house and grabbed by camera, the wind had got up and cloud was drifting across the mountain.  But it was too nice a day to not be outside so I decided to go to the cemetery.  As you do.

There's a certain magic to Te Henui Cemetery that makes it unlike any other I've seen.  It covers 36 hectares and is maintained by volunteers.  It's very tranquil and beautiful and the volunteers look up from their weeding or mowing to greet you.  I could only drive through and stop to take a photo out the car window when I wasn't impeding traffic, as there was a funeral in progress and no parking spaces available. 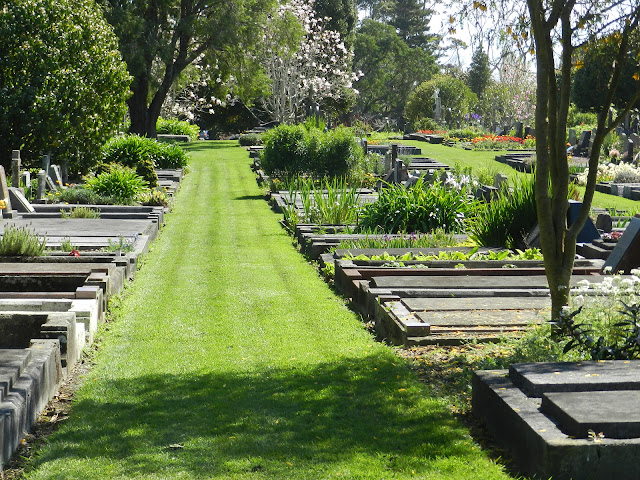 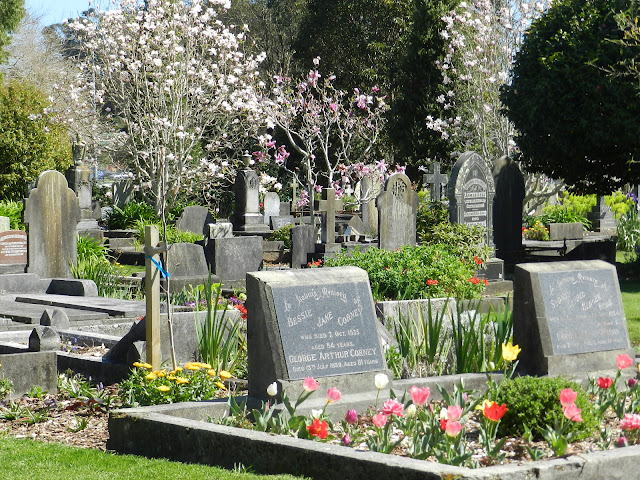 Reminders that spring is here are all around.  My favourite shot this spring was taken up north at Houhora Harbour where I spotted these managing to survive in a dead tree stump in the harbour.  Not a great photo but I admired the tenacity of the plants. 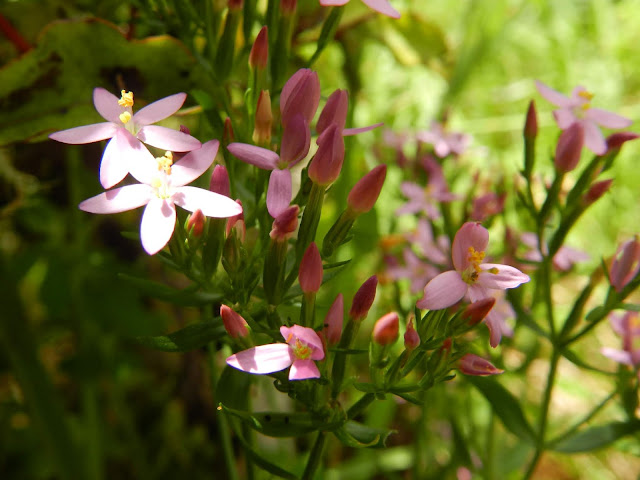 My rhododendron tree has finished flowering but they were everywhere, in all their glory, around New Plymouth where I spent the  past ten days. Usually it's cooler there but this morning, my first back home, I wasn't so sure.  It felt like winter was giving it one last shot. 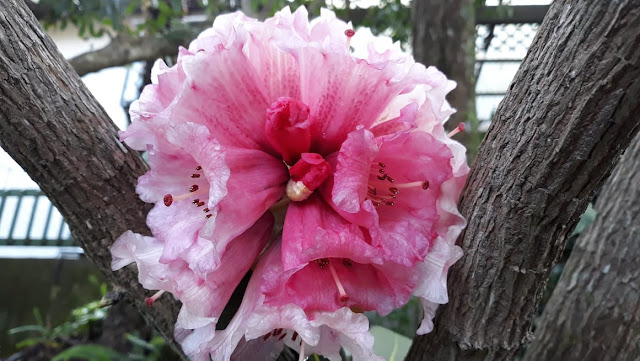 The azaleas which line my driveway are abundant this year.  Maybe I'm imagining it but the flowers seem pinker than in previous years. 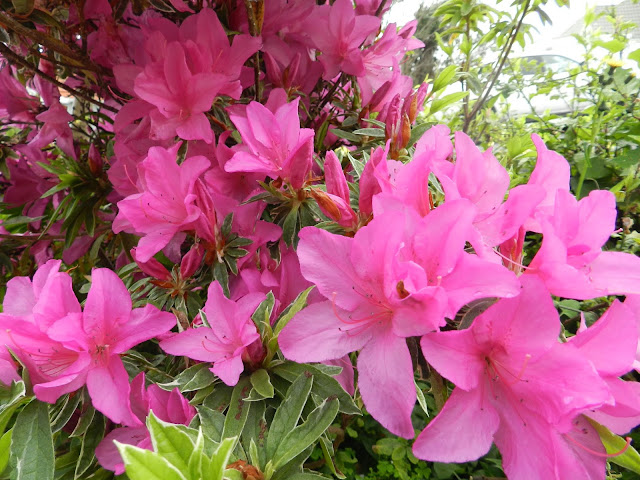 While in Taranaki last week I was reminded of walking around in Dingle in Ireland and spotting a plant I didn't recognise.  I asked several passersby if they knew what it was but each one suggested I ask the guard, he was the local gardener.  Except I wasn't quite sure if they were saying the guard or something else, and if they were saying the guard, who the guard was and where he/she lived.  Finding the guard led to a few more conversations with locals but I still had no idea I was looking for the local policeman which may have explained why some of those conversations seemed a little odd, to me at least.  I was wanting to identify a plant, why were people so concerned for my wellbeing and offering assistance if I needed it?

Anyway, the guard was delightful and only too happy to engage in his favourite subject - plants.  I was given a personal tour of the guard house gardens.   Turns out the plant was Gunnera and the ones I saw in Dingle were huge, much bigger than the plant I found in the back yard of my daughter's rented home in New Plymouth.  I can't recall seeing them here in the north of the country, I guess it is too hot and dry for them. 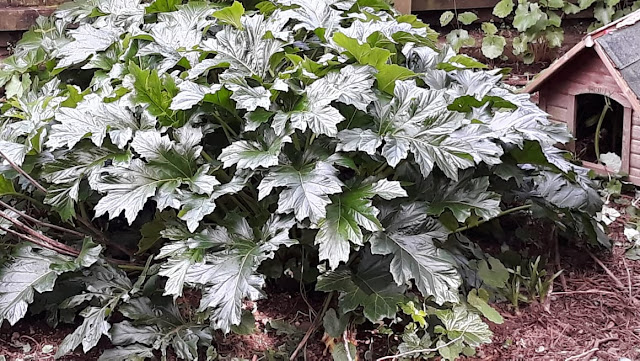 I also learned from the guard that the rhododendron is on the Irish Invasive Species List.  It really thrives in their climate creating dense thickets, blocking the light and reducing biodiversity.

Back down the east coast

After our day trip to the North Cape we had a leisurely all day trip back home via the east coast beaches.  We took the scenic route all the way.

After the horrid weather of the previous day this day was bright and shiney.

Finally, at Paihia in the Bay of Islands, Digby got to touch the water. 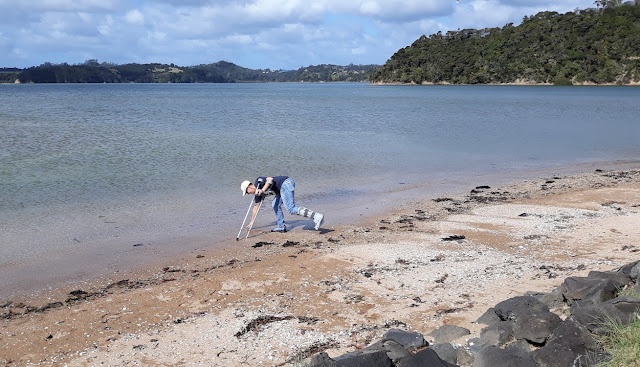 We took the ferry from Paihia to Russell.  Digby is a landscape gardener so appreciated the huge old Moreton Bay Fig,  planted in 1870, on the front lawn of Russell's first police station building. 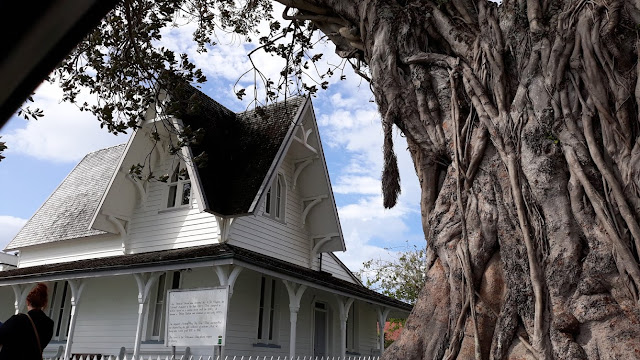 We took a short drive to the Waitangi Golf Club:

We arrived home just as the sun was setting on my hills of home.  And dark clouds were gathering again.

Tired but nothing a cold chicken dinner,  a glass of wine and good company couldn't fix.

Kaitaia is the last major settlement on State Highway 1 as you head north to Cape Reinga, the northern most tip of the country.  The population is around 5,000 and the main industries are forestry and tourism.  Tourist numbers to the area have been exceptionally low lately, so low that the tour buses along Ninety Mile Beach to the cape have often not been running due to lack of passengers.

When I was planning an activity for a visitor from Australia, a trip to the Cape was top of the list.  I've done the bus trip before with the local Kaitaia company, Harrison's and was rather devastated when I was told they didn't have a tour going the day I wanted to go.  I thought I might be able to go with one of the tour groups from the Bay of Islands but their tourist numbers are also down and they weren't running either.

But all was not lost.  I had chosen to stay two nights at Norfolk Motel in Awanui and I was about to witness what Kim can accomplish to keep her guests happy.  I had asked her to book the tour for me so it was she who had to ring me to tell me there were no tours running.  None at all - for the first time in her 10 years at the motel.  When she told me I went quiet, mainly because I was so disappointed but also because I was trying to think of a way I could juggle the time still available to us to fit in a drive to the Cape.  It seems not many people go quiet when they hear similar news because it was that quietness that, when she reported it to Harrisons, prompted them to say they would run the tour for just the two of us and another couple who were keen to go.

I still can't explain my surprise and gratitude to Harrison's for doing that.  How many companies would run a truck/bus from 9 am to 4.30 pm, over 200 kms with nearly half of that along the beach for just 4 customers?

Harrison's have designed and purpose built a fleet of powerful all terrain 4 x 4 truck to bus conversions.  They are fitted with huge super single tyres and are the first in New Zealand to have this feature. This makes for safer beach operation and passenger comfort. The seats are ordinary bus seats and large panoramic windows ensure you see everything there is to see. 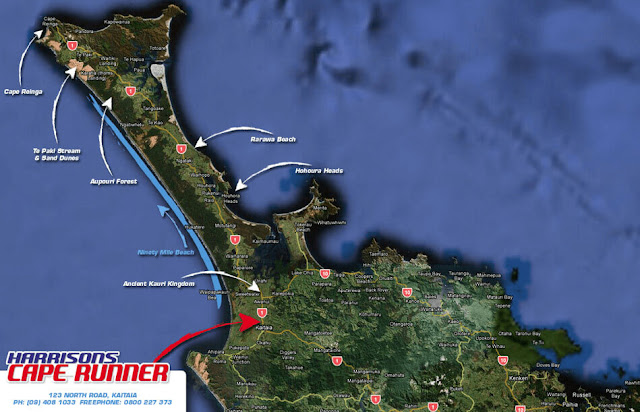 Depending on the tide, a tour to Cape Reinga will go north along the beach and back down the road or vice versa.  The day we went the weather was foul but the atmosphere on the bus was bright and cheerful.  It's hard not to be happy out on that magnificent wild west coast beach in the company of Selwyn Subritzky, driver/guide extrordinaire.  The wind was strong, forcing the waves well up on to the beach, although it was low tide, and leaving just a narrow strip on which to drive the bus.  In conditions like that it's comforting to know you are in the hands of one who has been born and bred in the area and who knows every dangerous quirk a west coast beach has to offer.  Forecasted intermittent showers were actually intermittent downpours, there was hail and lightning and every minute of it was fantastic!

The Subritsky Family are almost legendary in the Far North and Selwyn shares their story of early settlement in a way that brings history alive and his love of his land shines through.

I found it difficult trying to stand still out on the beach with my back to the wind to take a photo.  My guest managed it on crutches! 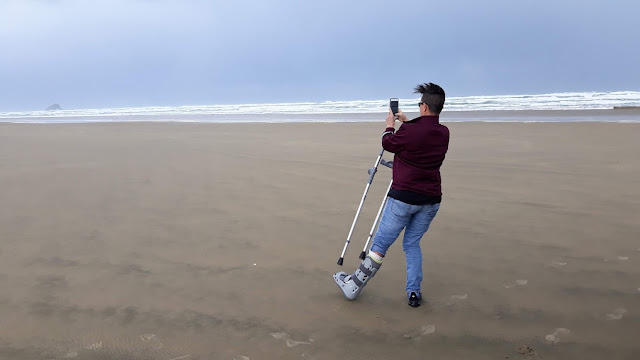 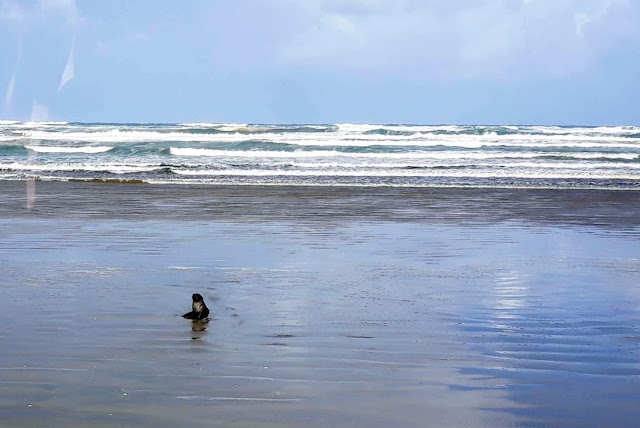 One of the features of the tour is departing the beach by driving up Te Paki Stream to the sand dunes just south of the cape which are like a huge natural sandboarding fun  park.

Heading up Te Paki Stream
The hardy young English couple were keen to have a go at tobogganing but were beaten by a  sudden hailstorm. 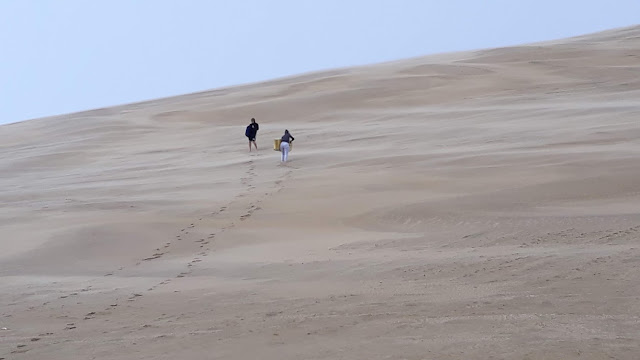 A long climb up the dune 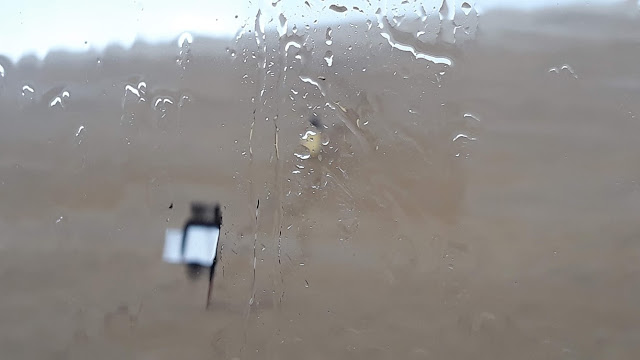 Usually the walkway to the lighthouse at Cape Reinga is crawling with people but this day there were only a handful of people, all of them friendly and laughing at the silliness (but fun) of it as we struggled to stand up straight. 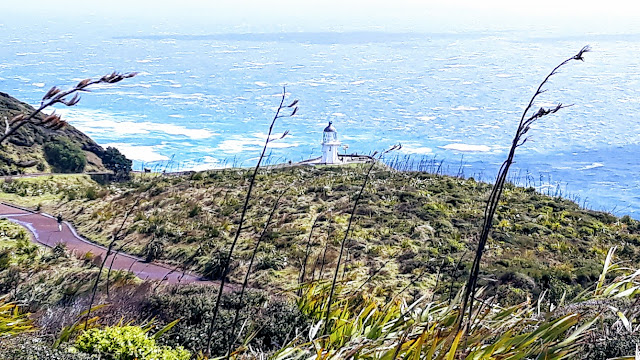 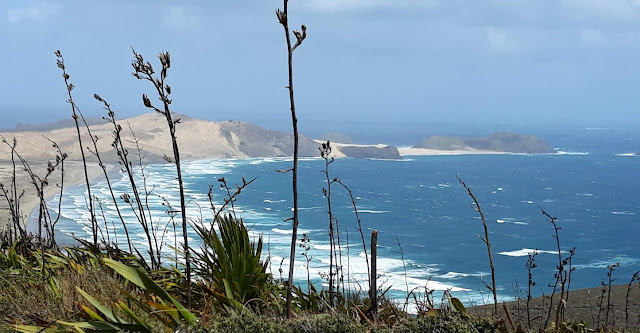 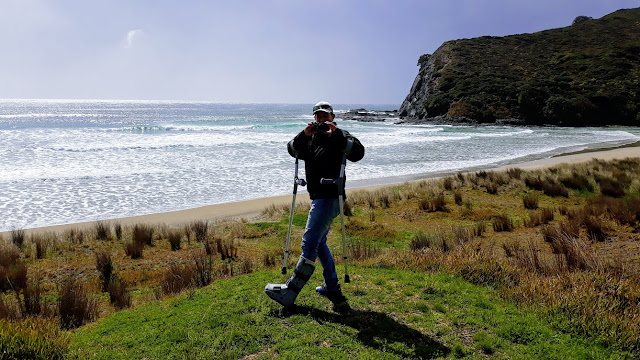 We ate our lunch in the bus at Tapotupotu Bay as more hail fell but the weather cleared just enough for a quick hop off the bus for a photo. 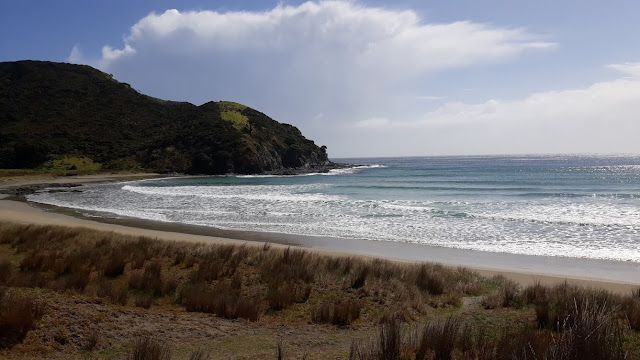 That was the story of the day really.  Deciding whether to wait for the rain to pass or take a walk and be prepared for a quick dash back to the bus.

Every photo was a quick point and shoot.  This one at Rarawa Beach on the way back.

I love this part of the country and thank Harrison's and Selwyn, for showing us the best of it - in comfort.  I hope the tourist numbers pick up soon and that you both prosper. 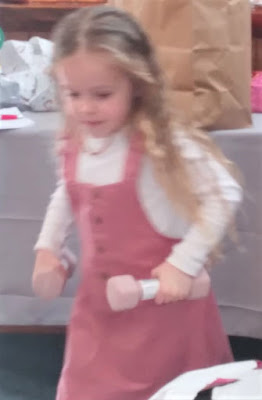