And so to Greece

I guess a common problem for travellers must be deciding how long to stay in any one place.  Had I known how much I'd like Ireland, Scotland, Istanbul I would have liked to stay in those places for longer.  But probably wouldn't have anyway because of budget restrictions.

After three magical days in Istanbul it was time to move on to Kavala in Greece.  We had booked a bus to carry us across northern Turkey to the Aegean Sea.  The helpful man on the front desk of the hotel where we had been staying assured us he had instructed the taxi driver where to drop us off.  Hmmm.  Perhaps there had been a communication breakdown.  Even from the back seat it was easy to see that once we entered the terminal area the driver had no idea which terminal we were headed for.  It was more from good luck than good management that my brother spotted the bus company name amongst the dozens of other bus companies.

My brother, Peter went in one direction to check us in, my sister-in-law went in another in search of a rest room and I sat with the luggage.  It was bedlam in that little terminal.  As if there weren't enough people and noise, a vendor of hot rolls (it was early morning) was weaving his way in and out shouting. 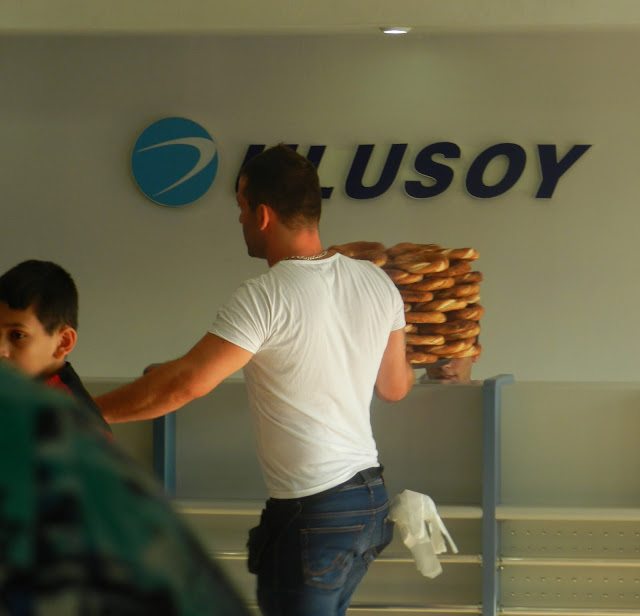 Somehow I understood a man who came looking for us and our luggage and went with him to where the bus was waiting.  I wasn't letting that luggage out of my sight!  But I didn't want to get on that bus until my brother and his wife had joined me.  The bus loader (not the driver, a man whose job it was to load up the bus) had other ideas.  His job description calls for special skills.  Like getting stubborn ladies who do not want to move onto the vehicle.  He pushed me to the bus door, turned me so I was pointed in the right direction then applied force under my backside to launch me up the steps.  I really was quite alarmed!  Peter appeared but the bus loader didn't spot him in the crowd - but where was Judy?  I can assure you I was ready to fight to get off that bus if it looked like it was going to leave without them.

All was well, of course, and we settled down for a long bus ride. 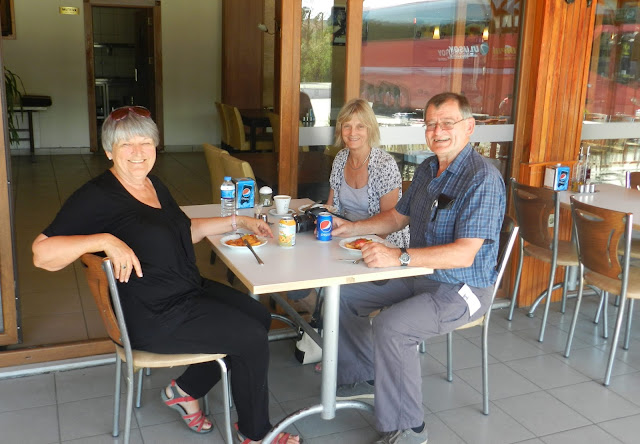 Lunch break on the Turkish side of the border (I think). 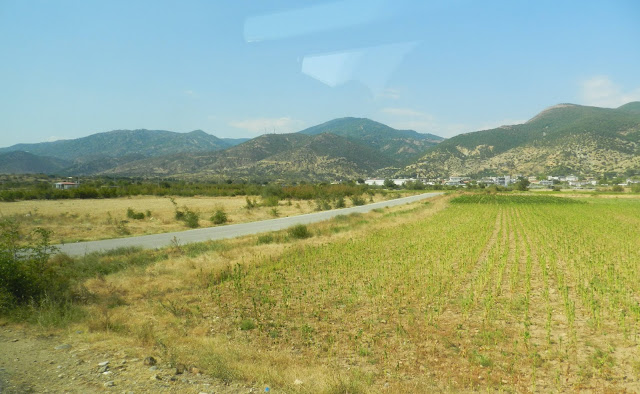 One of the very few places the bus stopped in the next eight hours was to let a passenger get off here.  The countryside was dry and quite desolate looking.  Although there was a beautiful mosque in every town, poverty was evident.

Security was quite tense at the border.  It was early September, just as the number of fleeing Syrian refugees arriving in Greece was reaching crises point.  Three passengers, quiet young muslim girls, were taken away as the rest of us passengers stood outside the bus in the sun.  It was a relief to see them return and to be allowed back into the airconditioned bus. 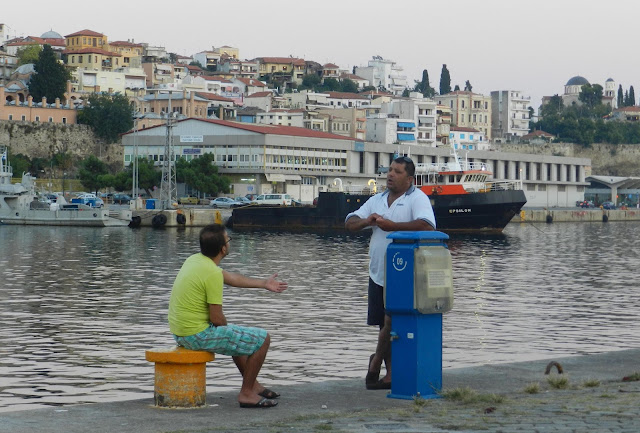 Late in the day we arrived in Kavala in northern Greece, where my brother's boat would be ready for us the next morning.  We found where we were to stay for the night and enjoyed an evening stroll along the waterfront before dinner by the harbour. 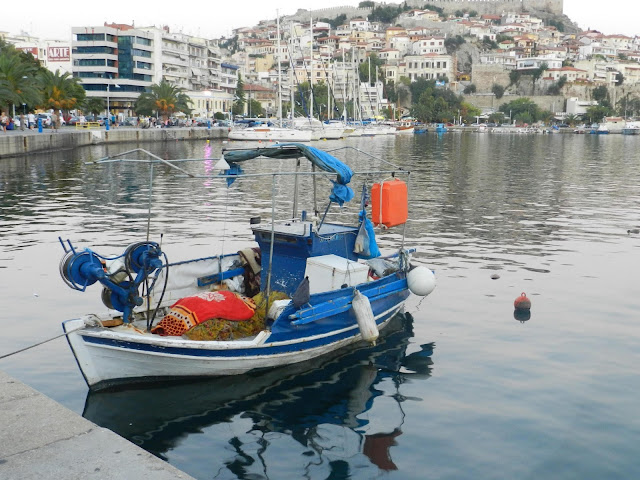 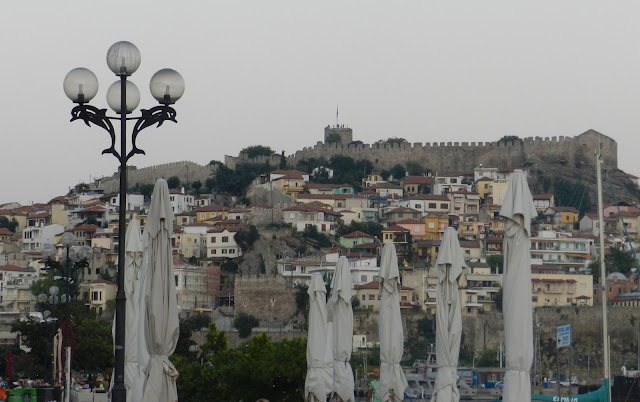 We had a distant view of the top of the Panagia Peninsula where on the highest point sits the castle overlooking Kavala city and the harbour. 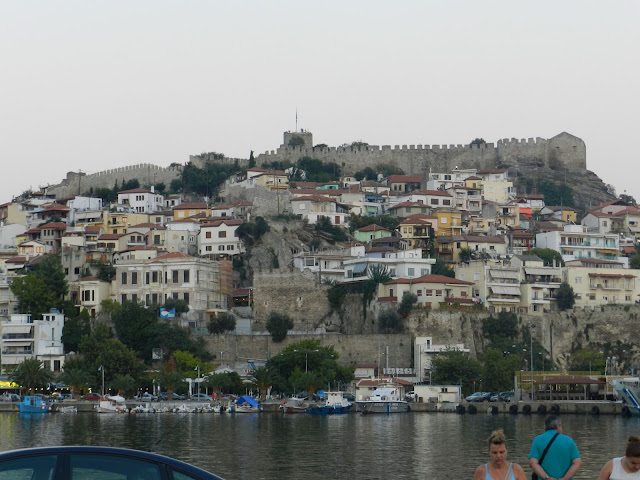 The next morning my sister-in-law woke me to show me how the parking lot opposite the hotel had been transformed overnight into a bustling marketplace. 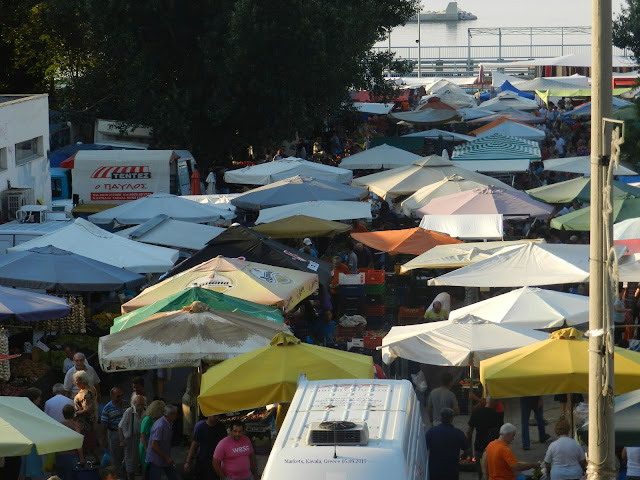 One could have been entertained just watching the traffic craziness.  I noticed even the policeman who was trying to direct traffic kept well back off the road! 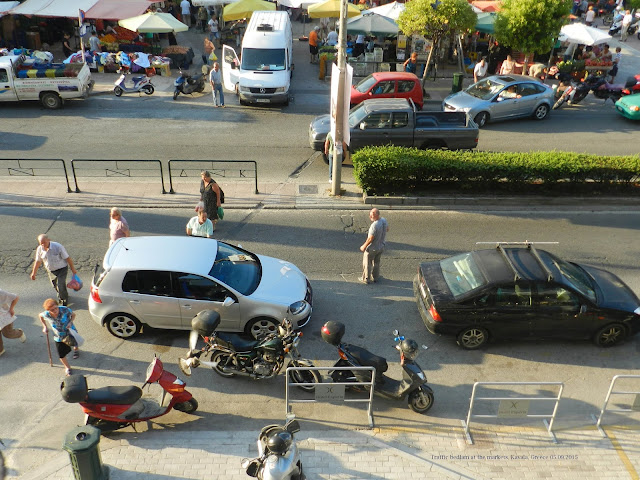 You can't be an Aussie or a Kiwi and not know about the special modern relationship between Turks and Australians and New Zealanders.

It's a friendship that has developed out of the horror of the First World War experience at Gallipoli.  Before the battle at Gallipoli, Turks and Anzacs (Australia and New Zealand Army Corps) had never been in contact with each other neither in a political or economical sense.  Most Turks and Aussies and Kiwis would probably not have even known where the other's countries were.

There's a famous Turkish tale that tells the story of two New Zealanders taken prisoner. They were asked where they were from. On being informed, the Turks said: "Never heard of New Zealand".  Some Germans who were eavesdropping explained it was a country in the Pacific, on the other side of the world. The incredulous Turks then demanded of their captives: "Why are you here?"  The prisoners said they thought it would be like playing an away game of rugby.

Today Turks, Australians and New Zealanders stand beside each other. They have a strong and friendly relationship.

Last year, at the quaint fishing village of Anadolu Kavağı, the last port before the Black Sea I experienced proof of this friendship.

It was a hot day and after enjoying the sea breeze on a tour boat, it seemed even hotter in the tiny village with the mountains at it's back.   The first thing we wanted was an icecream and the cheerful icecream vendor asked where we came from.  Upon hearing that I lived in New Zealand he smiled and waved his arms in a welcoming gesture announcing, "Ahh, Kiwi.  You are welcome. We are friends."  He invited us to use the table and chairs in front of his shop, under the shade of the only big tree in the village.  We politely declined as we wanted to wander around and explore.

For someone who wages war on feral cats I had been charmed by the cats of Istanbul.  There was at least one hanging around every eatery, sometimes a few, depending on the friendliness of the proprietor I guess.  In the village I found a lovely little ceramic cat to bring home for Georgia. 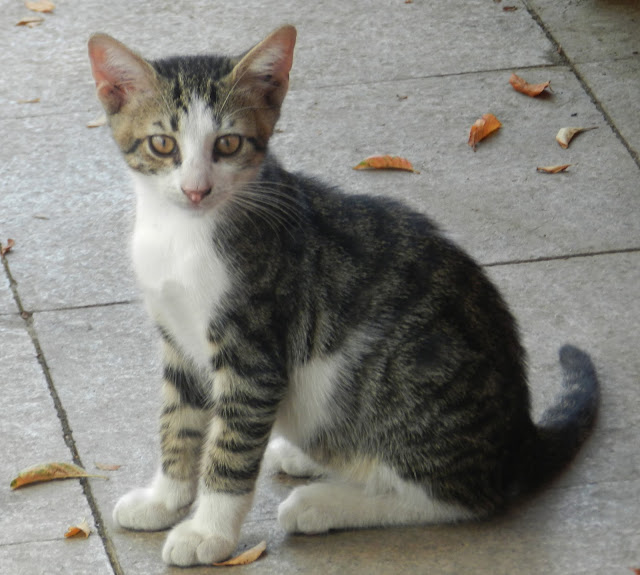 It really was too hot to wander far and when we returned to the area of the big shady tree we decided to take the icecream man up on his offer to use his table.  A few minutes later a man in a dirty apron with little order pad and pencil in hand came along and wanted to take our order.  Now we noticed the table was more in front of the fishmonger's shop than that of the icecream seller.

We said we didn't want to buy fish.
He said the table and chairs were for his customers.
We said the man just there in the icecream shop had said we could sit there. 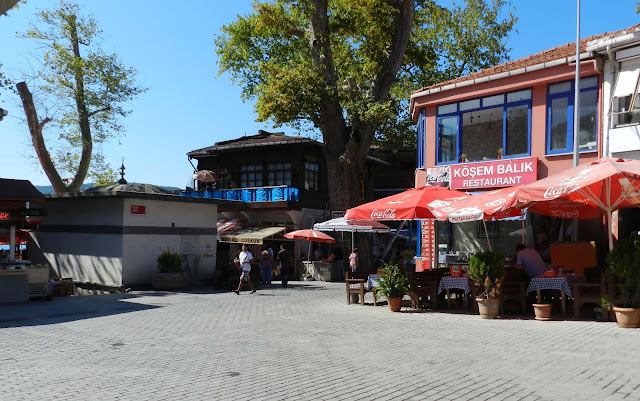 Sharing the shade of the big tree was a golden statue of Ataturk, a Turkish army officer, revolutionary and the first President of Turkey. He is credited with being the founder of the modern Turkey. 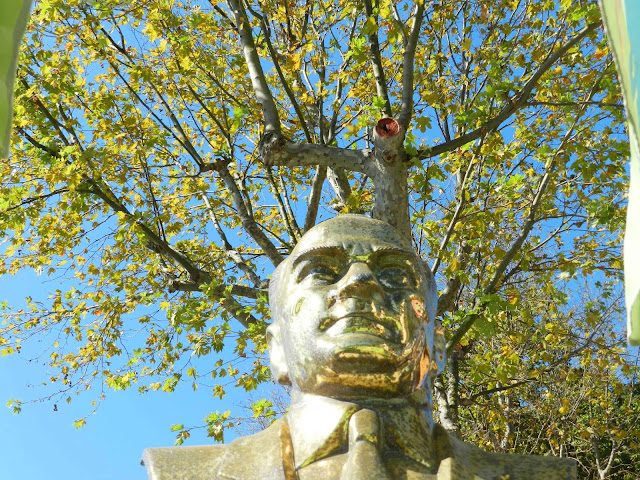 Some times life gets in the way of blogging.  And sometimes it's death.  Sadly this time it was my mother's death that took me out of the country for a while.  I can't help but think Mum would have been cross to miss out on her 90th birthday celebrations that were planned for early March.  I know I would have been.   My dad died on my brother's birthday nine years ago and it seems a very odd co-incidence that Mum died on my birthday.

I'm glad I returned home in time to watch my 17 year old grand-daughter celebrate life by doing her first sky dive.  A wonderful reminder that life goes on, to be embraced and enjoyed. 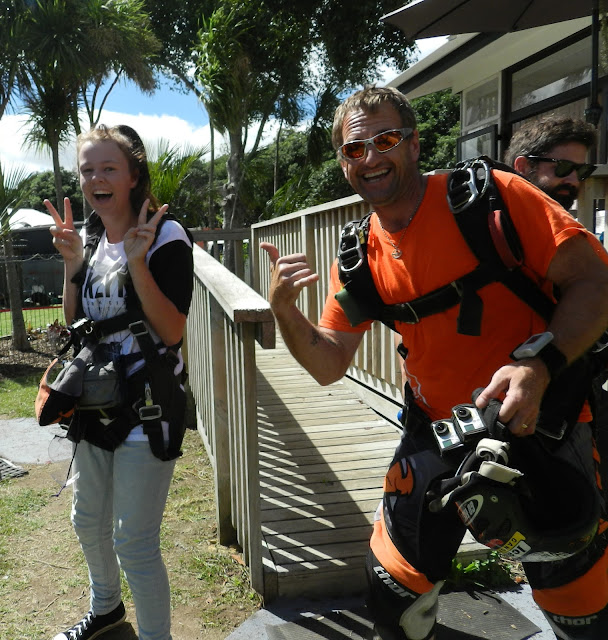 Kitted up and ready to go 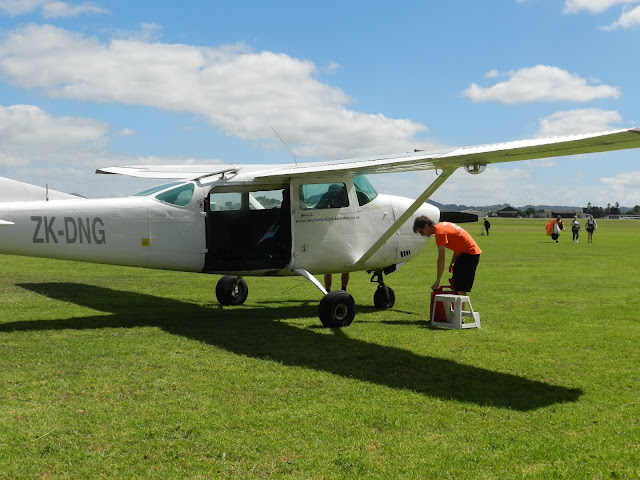 Hold on, they have to refuel the plane first 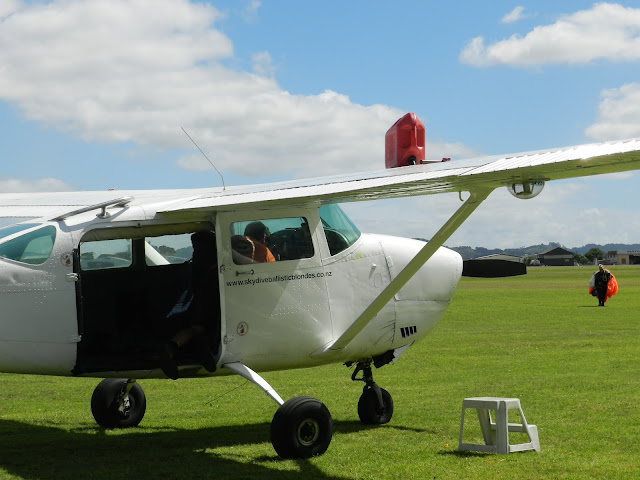 It looks so tiny as it taxies away 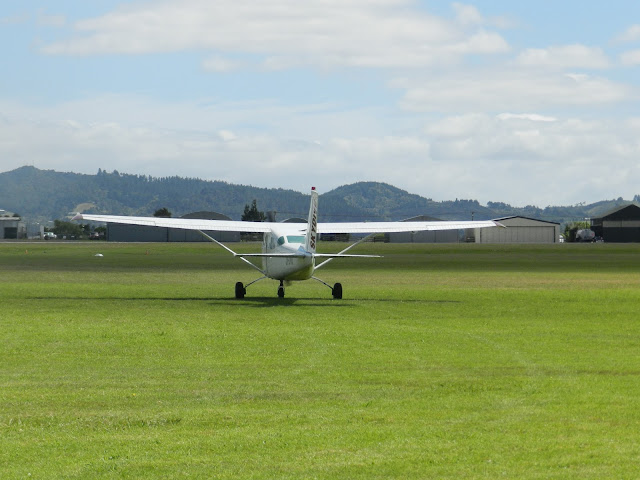 She's jumped.  There she is, way up there 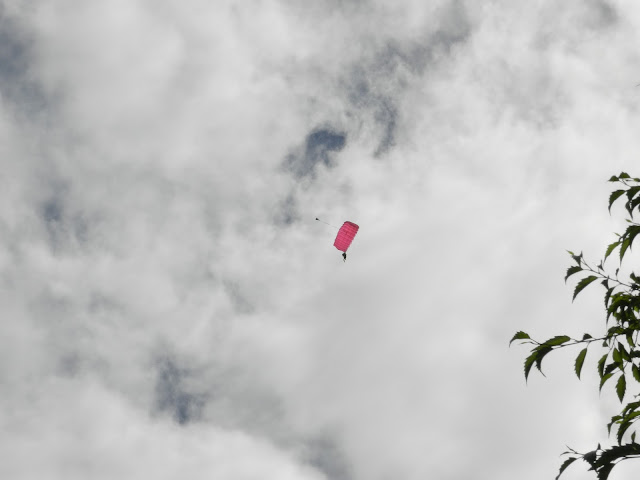 Finish it off with a perfect landing 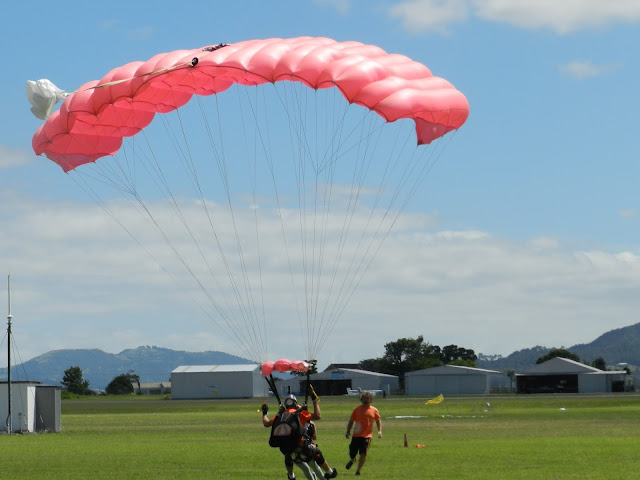 Those smiles tell the story. 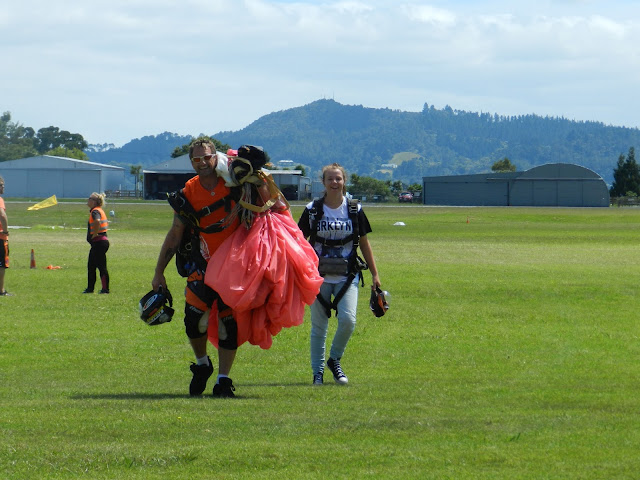 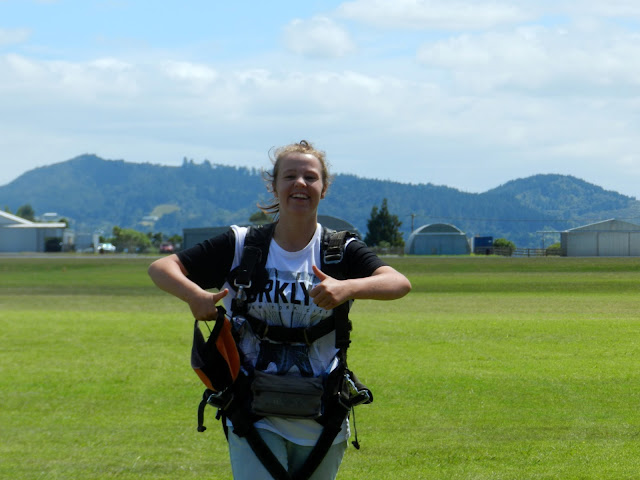 Thank you Skydive Ballistic Blondes for making the experience so wonderful for Shayde.  I think she will be back to do it again but says there are other things she wants to tick off her Bucket List first.  When did 17 year olds starting having Bucket Lists??
Posted by Pauline at 2:01 PM 11 comments: