We all loved Grandma and Grandad Osborne in a special way. They had the gift of making each of us feel special and never compared any of us to each other or to other cousins, whereas I always felt that we never quite measured up to Grandma Ward’s expectations. After Grandma Osborne died Esme, Tricia and I held a wake for her at the Irish Club in Mt Isa. We laughed till we cried, then laughed some more. All our memories of her were so positive! But the highlight of the night was when Esme announced that she had been Gran’s favourite! I couldn’t believe that she could possibly think that, as I knew that I had been her favourite but Tricia had the same belief. What a gift!

Grandad loved to tell us stories.  Ward means the Bard, the storyteller but I think the joy of spinning a yarn comes from Mum’s parents.  Even when he was confined to a nursing home, suffering from Alzheimers he would occasionally attempt to spin a yarn.
He once said to me, “Remember the Murphy girls?”  I nodded because there were Murphys in the family.
“They never did catch their murderers, you know.”  I thought, hello, I’m behind the times.  How come there’s been a murder and I haven’t heard about it?
So I said, “When did this happen, Grandad?”
He replied, “Back in the 1890s.  The Gatton Murders.  The two girls and their brother.  They never did catch who did it.  But I think it was bushrangers.  Men on horseback were seen up in the mountains  the following night.  Captain Starlight was around at the time."
Grandad’s best stories were about Tommy Day, an old bachelor who lived not far down the road who Grandad lead us to believe was “not all there” and Uncle Cecil who lived right at the end of the road and had been in Mum’s class at school. Tommy spoke with a high pitched, slow voice and Grandad could imitate him perfectly.  We waited, each holidays, for the latest Tommy Day story.
Mind you, I think Tommy got his own back at least once. One day Tommy came across a couple of men trapping parrots in Grandad’s Dam Paddock, the entry to which was opposite Day’s house. Tommy told them he wasn’t going to make trouble for them but to watch out for the old guy up the creek – “He’s as mad as a cut snake”. The trappers later went further up the creek where they came across Grandad and told him the story, asking where the mad old guy lived. Grandad thought it was a huge joke and told us they had been referring to Uncle Cecil. 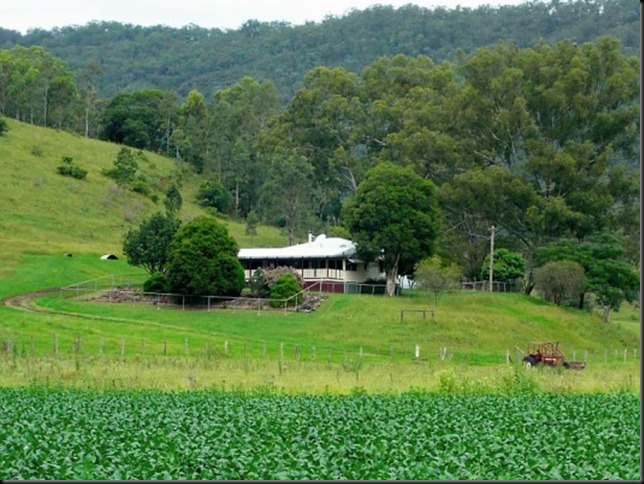 Uncle Cecil’s house today
He used “Uncle Cecil” to keep us from getting lost when we ventured into the mountains at the end of the road. He would tell us to follow the creek with a warning “Stay away from the road or you’ll go past Uncle Cecil’s house and he will come out and chase you.” We fell for his instructions hook, line and sinker, believing that if we went off the track we were to follow once we got to the next creek crossing (past the end of the road) we would be straying too close to Uncle Cecil’s property and goodness knows what would happen to us. Mum told me a few years ago that Cecil, had indeed, been a bully and Grandad was right to warn us about him. He used to ride a horse to school and would charge it straight at any youngsters who were walking.
We spent all our school holidays up on the farm at Townson. The road from Laidley followed the creek up the valley towards its source in the mountains and everything was either ‘up the creek’ or ‘down the creek’. Only Grandma’s mother and brother and Uncle Cecil lived further up the creek. From there you started climbing up into the mountains. The mountain range formed a U at the back of the house with mountains running back down either side. 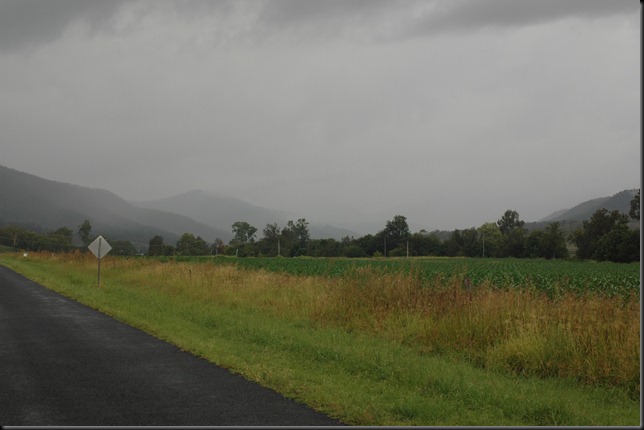 The road leading “up the creek” on a rainy day
When we arrived on holidays Grandad would always fill us in on where wallabies and dingoes had been sighted, and how many snakes had been seen lately. If a snake had been killed recently it would be hanging over the fence for us to look at and to learn to identify the different sorts (and to remind us of their danger). The house was only about six steps high and they had a huge birdcage under it, right beside the front steps. Gran would trap parrots down along the creek before we arrived so we always had some to look at and learn about.  On one accasion we were in the kitchen and heard a sqwarking coming from the birdcage, ran out and discovered a snake inside the cage, too swollen from it’s feed of birds to get back out through the wire netting.
Holidays were spent running wild around the hills and along the creek. We always had an ‘expedition’ into the mountains in search of wallabies and once we even managed to get up close to them. One special memory is a holiday when I was about 17 and the only one staying at the farm. Grandad said the wallabies had been coming down to drink in the evening in the Top Paddock, the one closest to the mountains. So, he and I set out on foot shortly after lunchtime with just a drink of water each. We found a good spot under some bushes and settled down on our bellies to wait. It seemed a long afternoon. It was hot and got uncomfortable and we only spoke occasionally in whispers. But we were rewarded. Just as I was giving up hope, Grandad poked me in the ribs and pointed. And sure enough, what looked like three families of wallabies were approaching. They came up to the water hole slowly, warily, and I was sure my breathing would frighten them away. But they drank, then played for a while before hopping away. It was such a special moment and extra special to be sharing it with my Grandad. It wasn’t until I was 50 and living in North Queensland that I got to see wallabies in their natural environment like that again. 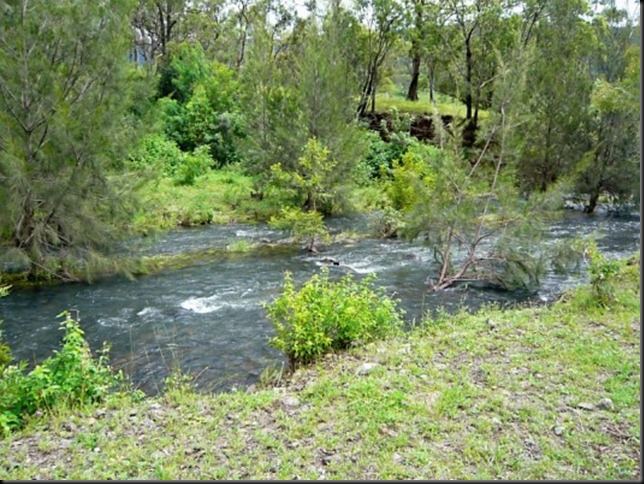 The creek how we liked it, with lots of rushing water.
There was usually a parrot trapping expedition as well but these only made us wonder at Gran’s skill. We used the same equipment she used but without the same results; we lacked the timing. We’d have a box with the lid missing. This would be turned upside down and propped up with a little stick attacked to a length of string. Seeds the birds liked (Gran always knew which seeds to use) would be placed under the box and the idea was when a bird went under the box to eat the seeds, we would pull the string and trap it. To start with we weren’t very good at sitting quietly under a bush, and on the rare occasions when we did and a bird approached we would either pull the string too soon, or, in our excitement, make a noise that frightened it away.
The creek and gully had to be explored every holiday in search of water holes, swimming holes and goannas. I remember one big old goanna inhabited the same place for years. It was exciting on the first day of the holidays to climb a little hill and come down it on the other side on our bellies to see if we could spot him laying in the sun. We only had that one chance because he was a wary old devil and would disappear after our first day on the scene. I guess we were a noisy bunch!
Posted by Pauline at 6:40 PM