photo taken from http://www.flatrock.org.nz/topics/animals/unwanted_amphibian.htm
Reading one of my favourite blogs has reminded me that I love frogs but hate toads.  In Queensland, where I grew up, it was the cane toad that was detested by all.  If I were to honestly recall what we as children did to cane toads you would no doubt be horrified and compare us to little savages.  Suffice to say that there was a standing record for who could kill the most while armed with a sharp stake within a specific distance between our street and the next.  I don't want to start "The War of the Brothers"  (it was bad enough when they wanted to debate who was the best sportsman) but I'm pretty sure Terry holds the record.
Up until 1935, Australia did not have any toad species of it's own.
Then some bright spark, a scientist, probably the best in the land, discovered that toads
were supposedly being used successfully in other tropical places to combat the cane beetle, a pest of sugar cane crops.  After rave reviews from overseas, a box of toads was shipped to North Queensland.  These were held in captivity for awhile and then they were released into the sugar cane fields of the tropic north.  It was later discovered that the toads  can't jump very high (only about 30cm) so they did not eat the cane beetles which stayed up on the upper stalks of the cane plants.  So the cane toad, as it came to be known, had no impact on the cane beetles at all.
There were only 102 of them so no-one worried about them.   They didn't know that they bred like rabbits (and that's another Australian disaster story).  Each pair of cane toads can lay 20,000 per breeding season (some published references estimate they produce as much as 60,000 eggs!).  All stages of a toad's life are poisonous so they have no natural predators to keep their numbers in check.   Fish who eat toadpoles die.  Animals who eat young toads and adults die.  The museums have plenty of snakes preserved in jars which were killed by toad toxin so fast, the toad is still in their mouths unswallowed.  Even small amounts of water which toadpoles have gotten into, such as a pet's water dish, can be poisoned by toadpoles.   When the pet comes along to drink from it's dish, it becomes sick. Vets in areas where cane toads abound report that a couple dogs a month are brought in ill just from mouthing toads.
Cane toads have proven themselves to be one of Australia's worst environmental disasters.  They have spread across most of Queensland, they are over the border into the Northern Territory and they have now reached the world-reknowned wetlands of Kakadu.  Their numbers are staggering in the southeast Queensland area and they are spreading down the NSW coast.
That was just a little side rant.  Where I was going was....
and I love to see bees in my garden but hate wasps.  Tom, who was recently my guest ,was stung on the hand by a wasp when he was here and it swelled most impressively.
Yesterday I spotted a wasp on my front deck that looked larger than the usual we see around here.  I'm wondering if a new species has found it's way here. 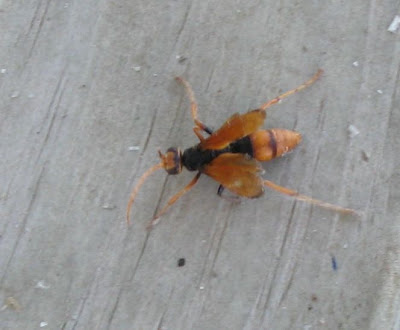 My little granddaughter spotted another a little later in the house. 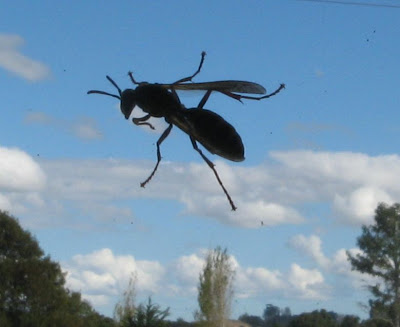 Anyone know anything about wasps?