It pays to always have your camera handy.   A few nights ago a friend and I were wandering in the half light towards a movie theatre when a man approached us with his hand extended as if he wanted us to look at it.  Which, of course, we did.  At first I thought it was a small green frog (the light was very dim, it shows a lot clearer in the photo). 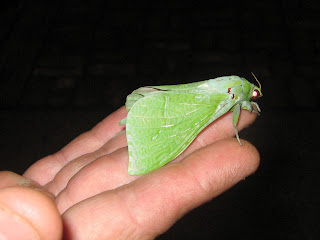 At the time we thought it was a Kauri Moth but it has since been identified as a Puriri Moth.  They bore holes in large trees, mainly the puriri.  Like most moths they come out at night, and they only live for a few days.  They are not exactly beautiful creatures but they are a distinctive green colour and quite large for a moth, really. 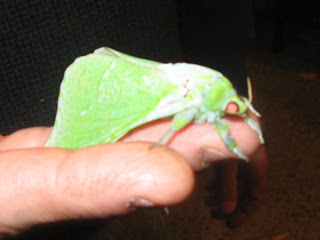 At least seeing the moth was interesting which is more than I can say for the movie we went to see - "Leaving".  My friend and I must be terribly lacking in sensitivity - we came away laughing from a film that was supposed to portray an undeniable passion which lead to a tragic end.

Give me a good moth any day!
Posted by Pauline at 6:50 PM