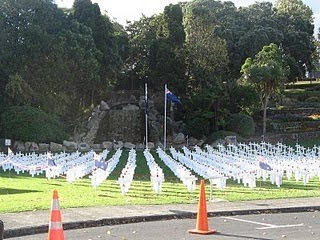 Today is Anzac Day, our national day of remembrance in Australia and New Zealand.  It is commemorated by both countries on this day every year to honour members of the Australian and New Zealand Army Corps (ANZAC) who fought at Gallipoli in Turkey during World War I. It  is now more broadly commemorates all those who died and served in military operations for our countries.

A few days ago my attention was caught by this display in one of our city parks. 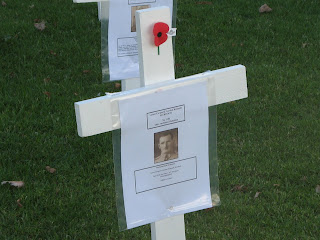 This Field of Remembrance will remain for a period of 30 days, each day represents one thousand New Zealanders who are buried in sixty countries and the oceans of the world.
That little field of crosses is a beautiful, if very sad, sight.

And then I got to trying to remember why the poppy is our symbol of remembrance for our war dead.
My memory is not what it used to be but given time I can often dredge up knowledge from the past.  Facts come slowly and are a bit jumbled but most times eventually I can sort them out.
First came a few words....Oh! You who sleep in Flanders Fields...enough to feed into Google.

And now I have the words to go with the scene above:


Oh! You who sleep in Flanders Fields,
Sleep sweet-to rise anew!
We caught the torch you threw
And holding high, we keep the Faith
With all who died.
We cherish, too, the poppy red
That grows on fields where valour led;
It seems to signal to the skies
That blood of heroes never dies,
But lends a lustre to the red
Of the flower that blooms above the dead
In Flanders Fields.
And now the Torch and Poppy red
We wear in honour of our dead.
Fear not that ye have died for naught;
We'll teach the lesson that ye wrought
In Flanders Fields.
Lest we forget!
Posted by Pauline at 3:35 PM