I nearly flagged writing about our Saturday adventure. I just don't have the language skills to share with you what we discovered when Shayde, my ten year old grand-daughter, six year old Georgia and I decided, after going for a short walk around the farm, that the day was too lovely to go back home. Shayde came up with the idea of going to the "swimming hole" on our neighbour's property as I'd never been there before and they were keen to show me. This involved following the creek up towards its source in the mountains.

We followed a track beside the creek most of the way and it was lovely, much the same as along the creek banks as it runs through our farm. But then the track climbed a hill and as we came down the other side and around a corner the ambience changed, Georgia announced it was a magic place and I had to agree. Shayde elaborated that it was mystical (a 10 year old has a better vocabulary) and I agreed with that too.

The sun was sparkling on the water where the track crossed the creek. I'm not given to getting my feet wet and cold but didn't hesitate to shed my shoes and socks and wade across the stream. And yes, it was very cold! 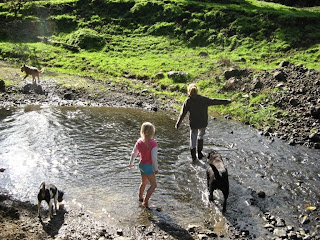 The shoes and socks went off and on a further three times as the track criss-crossed the stream before I gave in and continued on my way barefooted. There was a lot of ouch-ing going on. The stones on the bottom of the creek really hurt my tender (not to mention nearly frozen) feet. 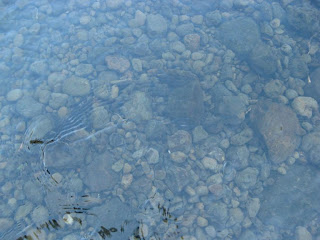 We were leaving farmland and both sides of the creek were covered in bushes and ferns. 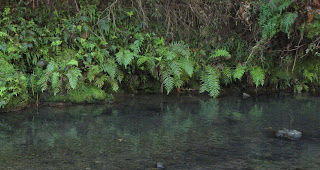 The girls were scampering off ahead and the dogs were enjoying themselves no end. Our neighbour's dog had decided to accompany us and amused me with his 'retrieving' antics. With nothing else he retrieve he was busy picking up rocks from the creek and bringing them to me. 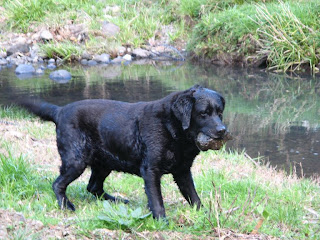 Then the girls heard the waterfalls ahead and took off with me hobbling barefooted behind. (They were barefooted by this time too but their little feet are tough!) 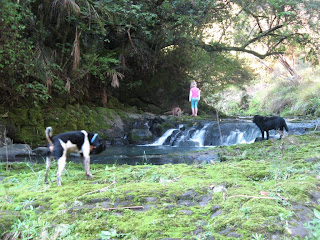 Honestly, I'm not a fanciful creature. I like to spend time in Georgia's make believe world but most of the time I'm a practical soul. But, when I turned a corner and saw this little waterfall before me I felt the fairies were there with us. 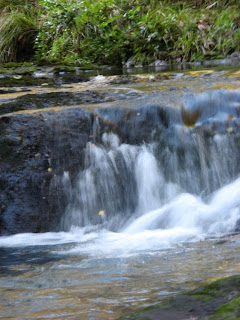 We went far enough to see four little waterfalls. The fairies were frolicking and tumbling about in each one.

Then we came to a reach of still water and beautiful reflections (couldn't find them when that was the shoot out theme, could I?) 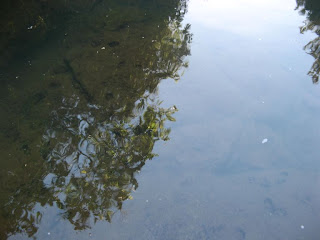 I would have loved to continue but my feet were aching to be warm again, so we called an end to the day's exploring. We'd gone way past the swimming hole and were in territory neither of the girls had visited before. With the promise of another exploring adventure when the weather warms up a bit and we are armed with more sensible footwear, we turned for home.

On the way home, with Georgia's hand in mine, she told me about the forest dragons. I hadn't noticed them but she assured me they were there. However, we were safe. Forest dragons are scared of dogs (did you know that?) and we'd had little Sam to keep her safe, medium sized Lewey to keep Shayde safe and big Zac to keep me safe. Gosh, I love sharing that kid's world!
Posted by Pauline at 7:32 PM